October 13, 2007
The Eagle (Der Adler, auf Deutsch) just sent me This Super-Sweet Article about the Zeppelin revival movement. Let me just say that I would travel by Zeppelin rather than heavier-than-air craft any day of the freakin' week! I'm not as big an airship nerd as the person who wrote the wikipedia article I've linked the title to (homeslice went so far as to quote airship-related portions of the Treaty of Versailles. Big Nerd Alert!!!), but even a novice like myself can appreciate how great airship travel could be. My last flying experiences? Sucky. Thanks for the cookies, Midwest Express, but too little, too late. I would gladly tack on an extra day or two to any travel I did if it meant: comfort, space, human interactions, ability to open the windows (!!!), and a sense that as a passenger I was more than a seat-filler. 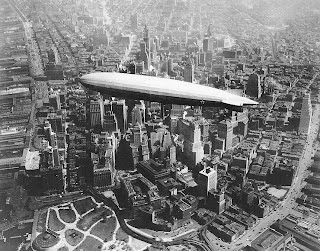 Incidentally, how sweet is this photo?!? (Thanks, wikipedia!) The majestic, perfectly streamlined USS Los Angeles cruises peacefully above the nascent skyscrapers of Manhattan, the docks framing the island's tip, the architecture fading and diminishing in differentiation to the North...I can almost feel a fedora and three-piece gray wool suit materializing on my body as I look at it. It makes me feel like an extra in The Hudsucker Proxy.

The author of the BBC article fantasizes about an overnight London-to-Rome trip, traversing the Riviera and the Mediterranean at 1000 feet. He also mentions the round-the-world trip undertaken by the Graf Zeppelin, which wikipedia tells us took just over three weeks: Lakehurst, NJ to Friedrichshafen in Germany, to Tokyo, to LA, and back to Lakehurst. I would part with three of my toes to have been on that trip. Maybe four if they took my pinkie toes, the ones with the persistent toenail fungus. Wikipedia also mentions that in 1924, a Zeppelin travelled from Friedrichshafen to Lakehurst in 81 hours--three days and nine hours. I'm pretty sure that's against the prevailing winds--not bad, Zeppelin! What's more, that was almost 85 years ago--probably only a few thousand sapient earthlings were alive for that journey--and one wonders what would be possible today? Lifting body airships? Carbon-fiber girders and supports? Turbo-jet engines? I'm no engineer (that much at least should be obvious) so I would love to hear from those more knowledgeable than myself what innovations would be possible in airship design and construction. I would LOVE that. There would probably be something involving computers. The internet, perhaps? Definitely plastics. At any rate...

Flying to Europe in a jet basically knocks two days off your life, minimum, once you've gotten to the airport, taken connecting flights, landed, gone through customs, stumbled to lodging, and slept off the sharp edge of our jetlag. I would bet dollars to donuts that the slower travel of the Zeppelin would make for a much smoother transition, and how great would it be to have the journeying part of travel be enjoyable, rather than the awful shit you have to put up with in order to reach your destination? I've always been bigger on the journey than the destination, anyway. And flying in a Zeppelin--would that not be the apotheosis of Awesome?!?

One last gem from Wikipedia:

"On March 4, 1936, LZ129 (quickly named after former President of Germany Paul von Hindenburg by Eckener [Dr. Hugo Eckener, a man who had long before envisioned dirigibles as vessels of peace rather than warfare] in an attempt to preempt the Nazi Party from naming the ship after Hitler) made her first flight. However, in the new political situation, Eckener had not obtained the helium to inflate it due to a military embargo; only the United States possessed the rare gas in usable quantities. So, in what ultimately proved a fatal decision, the Hindenburg was filled with flammable hydrogen. Apart from the propaganda missions, LZ129 began to serve the transatlantic lines together with Graf Zeppelin."

So if Eckener hadn't been such a damned, peace-and-airship-loving hippie, we would be talking about the tragic crash and explosion of the Zeppelin Hitler. Oh the humanity, indeed. You never know, people.

Susannah said…
There's only one thing to say about zeppelins, and that's WOWEEEEE!
6:38 PM

Rev J D said…
Now *I* want to travel by zeppelin. I think it would be the perfect retro futuristic travel, once they're made out of solar paneling. Heh.