February 07, 2008
One highlight of this course was a meeting with His Eminence Cardinal W. Kaspar, who leads the Ecumenical Dialogue division of the Catholic Church. We met in a large room, w/fancy chairs and question-microphones. 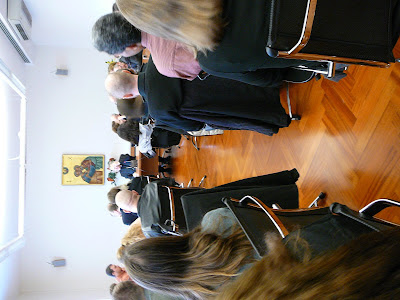 Cardinal Kaspar sat at the head of the large, U-shaped table under a large icon of St. Peter and St. Andrew embracing. 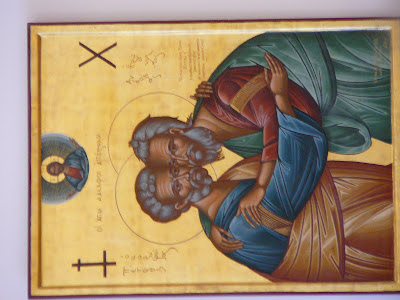 Peter is the mythic head of Catholicism (the rock upon which Jesus chose to build his church, acc. the author of John)--there's a reason the biggest church in the world is named Saint Peter's. Andrew has a similar role in Orthodox Christianity, and the image of the two embracing serves to remind those of the Catholic and Orthodox faiths that as the two were brothers it is fitting that their respective churches would embrace each other like brothers.

In terms of iconography, Peter is usually depicted holding the (massive) keys to the church, except for the occasional depiction of his martyrdom. He was supposedly crucified under Nero, at the Roman Circus (chariot course) that in antiquity was near the present-day site of St. Peter's Basilica. However, he blanched at being crucified in the same manner as Jesus, and for his last request he asked to be crucified upside-down. 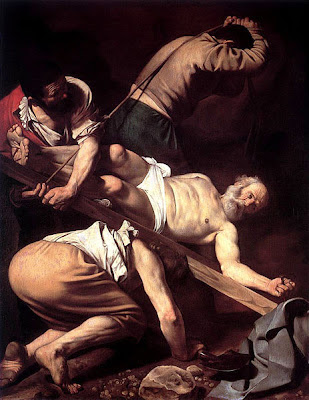 (image courtesy of wikicommons; this is Caravaggio's famous depiction of Peter's crucifixion, groundbreaking in its attention to the physics and strain involved in the act of crucifying Peter, depicted not as a saint, but as a frail old man--I missed seeing this one in person, to my great regret. It hangs in the church of Santa Maria del Popolo...)

Earlier in the story, Peter is trying to escape the Neronic persecution that would claim his life. As he flees down the Appian Way, he encounters an apparition of Jesus (or Jesus in the flesh, depending on your personal beliefs), carrying his cross and heading deliberately towards Rome. "Domine, quo vadis?" (Lord, where are you going?) exclaims an astonished Peter. "I am going to Rome, to be crucified anew," says Jesus. Ouch! Chastened, Peter turns tail and heads back to Rome to meet his fate. 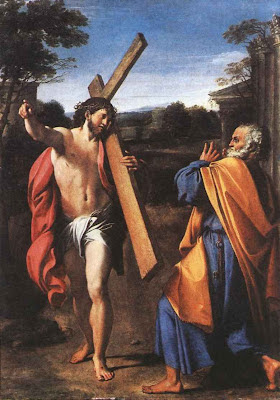 (again, a wiki-image. The painting of Peter and Jesus is by the famous fresco painter Annabale Carracci, perhaps most famous for his painting of a peasant eating beans: 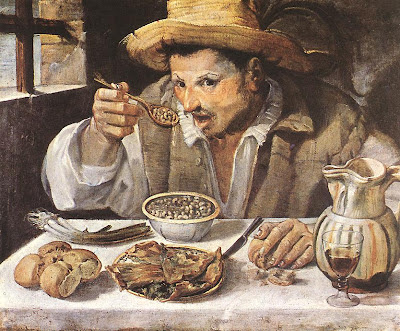 Saint Andrew is sometimes depicted with a pen and paper, but that's an attribute of a number of saints, so is not terribly useful for IDs. Fortunately, according to legend he was crucified on a Greek cross (an X, not a T), and is often portrayed with a cross of that shape, or with two things in the painting or sculpture in question crossing conspicuously. 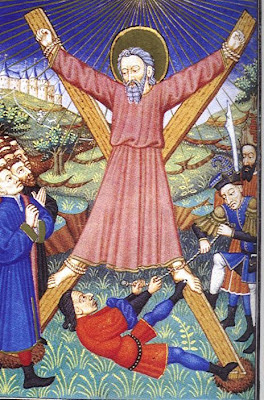 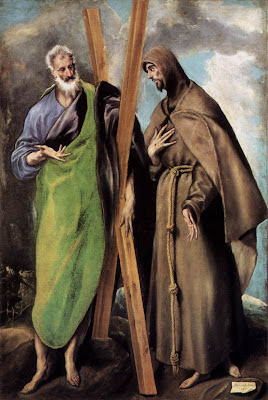 But! We've gone very far afield, thanks to my love for Catholic iconography. That feels odd to say, given that at my most Christian I'm barely an agnostic, but there it is.

So: we met in a really fancy room, the Cardinal sat under an icon of Saints Andrew and Peter, and proceeded to turn all our polite questions into opportunities for spin. It was very disappointing, but not surprising given the current papal trends. For instance, while we were in Rome, Pope Benedict celebrated Mass in the Sistine Chapel ad orientem, with his back turned to the congregation at several times. This is a marked change from the reforms of Vatican II, and seems to be a theme with this papacy. You might have read above about how Sarah, Will, Mom, Dad and I stumbled onto the Pope's advent address in St. Peter's square--hard to say what it all means, but it sure means something. I also will write above about our meeting with Rabbi Di Segni, and his current criticism of Pope Benedict's revival of the Latin Mass, which despite whitewashing still calls for the Jews to see the error of their ways.

Douglas Underhill said…
Wow. Reading this *really* makes me want to go back to Rome.
7:24 AM